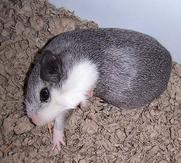 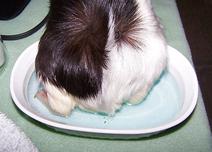 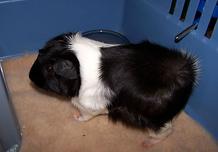 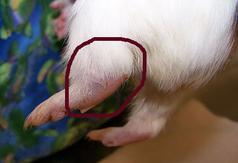 Four brothers and their mother were housed in a too-small cage with a wire floor. One of the baby pigs had only "three legs". He got one of his legs stuck in the wire floor when he was about two weeks old. When he was pulled out he jumped or twisted and the owner thought that he had most likely broken his leg. The mother also had a left-rear leg problem and it was not known if hers was also broken. Neither pig was taken to the vet. The leg was most likely broken when he was two weeks old and healed/set in one week: "Old fracture of left tibia - healed with arthrodesis (frozen) torsal joint. No treatment except soft bedding to prevent sores on foot." He and his brother went on to be adopted and were fine in their new cage and home. Some guinea pigs have dislocated limbs such as the one on the right. No corrective surgery was performed due to his permanent head tilt; cause of tilt unknown. Another guinea pig had  a similar problem with her rear leg and it was removed. Both guinea pigs had no trouble getting around.

Oreo was found in a bird cage that had been left on a sidewalk. He was very underweight and had bumble foot on the pads of both rear foot pads. He was treated with Bactrim, Metacam, Vitamin C and Silvadene cream applied topically to the foot pads. In addition, he had his feet soaked in diluted Nolvasan and also plain warm water. Vet bedding was placed in his cage while his foot pads healed. The photo on the top right shows a foot of a guinea pigs who was in a shelter. The important thing about bumble foot is that it needs to be treated ASAP so that it doesn't get to the stage where it becomes systemic. Using soft bedding and keeping cages dry and clean can help prevent the problem. Mild cases may be treated with Healx Soother Plus or Gorgeous Guinea's F+M Ointment. 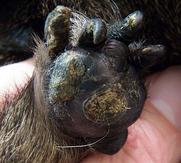 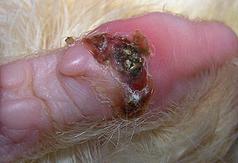 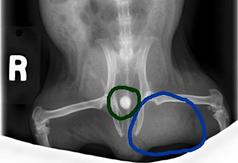