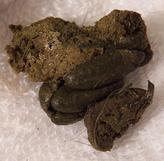 The first two photos to the immediate right show a guinea pig who had glaucoma and a luxated lens which necessitated the eye being removed. The next two photos show eyes with a discharge; the red eye's discharge was due to a blocked tear duct. The next eye shows an eye injury. The far right eye on the bottom shows an eye with a fatty eye/pea eye which does not need to be treated medically unless there seems to be an problem such as an infection. For non-medical issues I use Bausch & Lomb's Eye Wash (for humans) to clean eyes. For any eye concerns please see your vet since there are some medications that cannot be used if there is an injury to the eye. 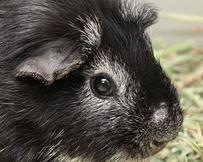 Fungal infections can be quite difficult to cure but cases of mild ringworm can self-correct within about four months. The guinea pig on the immediate right and his cage mate were both pulled from a shelter and tested positive for ringworm. Initially they were treated with a topical cream that made it worse. The treatment was then switched to a variation of University of Davis' ringworm protocol for shelters which resulted in the fungal infection being cured. The guinea pig on the far right had a bad fungal infection that may have gone systemic. Initial topical treatments including bathing did not resolve the problem. She was switched to an oral medication and immediately got diarrhea so the medication was  stopped. She was never cured of the fungal infection. 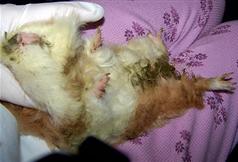