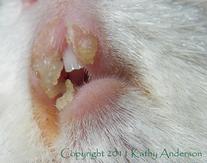 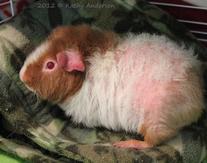 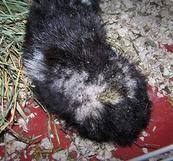 Mites are quite common and usually initially manifest themselves by a guinea pig displaying symptoms of scratching along with flaky skin. If left untreated the scratching can become intense with open sores and scabs resulting. Seizures and even death can occur in bad or untreated cases of mites. (Seizures can also be caused by neurological problems.) It is fairly easy to treat mites; the drug of choice is Ivermectin although some people use Revolution. Multiple doses may be needed to cure the mites. It is very important to make sure that the problem is mites rather than a fungal infection since they are each treated in a different manner. Click here to view Oscar and Pyn's photo album.    WARNING: GRAPHIC MEDICAL PHOTOS AND VIDEOS!

I had a guinea pig who had a couple of lumps when I got him. There was a small one on his side and a larger one on the top of his rump. At first it was thought that they were both abscesses and their contents were expressed. Both lumps came back so the vet cleaned them both. They came back again and so we had them removed and they did not come back and others did not shown up elsewhere on his body. The vet determined that they were both sebaceous cysts unlike a female who had cancer. Many times sebaceous cysts can just be expressed at home and not require surgical removal but since one of the male's was quite large he needed to have it and the capsule removed so the smaller one was also removed. Other lumps may be malignant or lipomas/fatty lumps.