bin day in and day out if she has the chance. They both like to sleep in the far back corner so this will save so much fleece changing." 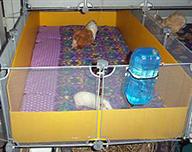 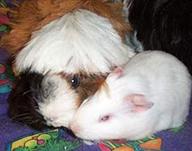 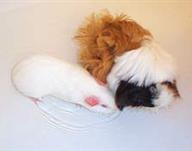 "...To kill time we went to a pet store. I was heartbroken when I looked at the cage that held the four pigs ... I mean four crammed. One of them looked like she had a head tilt. I wanted to say something but my hubby dragged me out before I could cause a ruckus. I wanted to find a way to take her ... I was so worried about the white one. When we left I cried a bit and my hubby was extremely upset too. I never saw the pet store like that before. ...I told my hubby that I am so glad that feed stores carry what I need. I cannot go into the pet store anymore. I wish I could take that white one. I would have found someone who could treat her for a head tilt. She just sat in the corner all alone while the others played and ate. One of the pigs tried to get her over to the food but she would not move." ~Angel

PLEASE NOTE, Angel did go back and get the little guinea pig with the head tilt and this website follows Pearl's recovery and treatment. While some may not consider getting an animal in need out of a pet store a "real" rescue, the reality is that the removal of any animal from a neglectful or abusive situation can be considered a rescue.
"When we first got Pearl she did not stop crying for five hours. I went into the room and she still went on crying until I picked her up. I put her back in her cage and she still cried so I took Snowie and put her in her cage and she stopped crying. They are best friends. Miss Snowie is such a wonderful mommie to Pearl since she has come home with us."
"Pearl's very first piggie bath. She enjoyed her bath and she loved licking the water before I shampooed her. I only had the water up to her little toes so she could not get hurt or drown. She kept cleaning herself and was not too pleased at all with getting a bath. But I feel better getting her all cleaned up after rescuing her. I wanted to wait until she settled in and had seen the two vets."
"Pearl and Snowie got a bigger cage and it is a pretty yellow with flowers. I took left over Coroplast and made a 2x1 hay bin with an opening so Pearl and Snowie can get in without a problem. Snowie practically lives in the hay 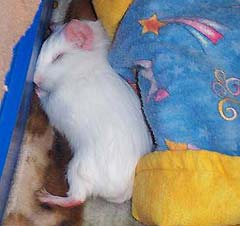 Like Guinea Pig Fun's Jasmine and Jo and Dutch's Tiny Tim, Pearl was a rescued guinea pig. However, her story is different from Jasmine's and Tim's. She was a special-needs guinea pig, with immediate medical needs, who was rescued from abusive and neglectful conditions in a pet store. The pet store had two lawsuits pending against it and this incident was reported to the humane society.

A website was created for Pearl, a young female who was a lethal  (lethal gene aka microphthalmia), so that others could follow her healing process and treatment. A lethal is the result of a Roan bred to Roan or a Dalmatian bred to Dalmatian. The all white, pink-eyed guinea pigs often have deformities and medical problems such as malocclusion and blindness. Although all lethals are pink-eyed whites, not all pink-eyed whites are lethals. Many times they do not live very long. Dori's story has been included so that others may learn more about lethals and the hazards of irresponsible breeding.
Like Jasmine's and Tiny Tim's websites, her former website was a tribute to Pearl and a symbol of hope to all of the other critters who suffered or still suffer from abuse or neglect or ill-breeding.
View on Mobile