REALITY CHECK: Jasmine was quite sick when she was rescued. She had severe malnutrition, mites, and was pregnant. She was constantly hungry and therefore could not meet her own nutritional needs much less those of her unborn babies. Her babies were born within the week of her arrival and none of the babies survived. She also had a mummified fetus that the vet expelled via a drug. The vet had the caretaker reported to animal control but nothing came of it. How many more will suffer like she did? Will it ever end?

For information on intentional breeding, please visit this page. To view larger images of the photos below, please click on each photo.

If a female has not been bred/had babies before the age of 8 - 10 months, there is the possibility that she may need to have a C-section to deliver the babies. The reason is that the cartilage becomes less flexible and may not fully separate/open for delivery. A C-section is a serious operation and neither she nor the babies may survive. Another pregnancy concern is toxemia, which can be fatal. Being overweight, not fed a nutritional diet, not getting enough exercise, and heat (weather/environment) can be issues that can predispose the female to possibly getting toxemia. Be on the lookout for depression, non-eating, bleeding, listlessness, and any other behavior or symptom that is not "normal". If any should appear, call your guinea-pig-knowledgeable vet ASAP or head to a Pet ER clinic. Most deliveries are happily non-eventful but the above information is included in case there are any problems. With or without problems you should soon be seeing babies, which are a delight to behold as are their antics which never fail to entertain those who watch and care for them. Enjoy!

hours later and was given some meds (oxytocin) to pass/deliver the mummified fetus that had remained inside her. Two of the babies were flat out and were put down at that time. The remaining baby was fed supplementally but she too did not make it.

​Some important elements for a safe and non-eventful or life-threatening delivery are a clean, baby-proof/escape-proof cage and non-handling of the mother in the final stages of her pregnancy. She needs lots of quiet time and rest since the delivery can take a lot out of her. If you put your hands gently around her belly (while she is in the cage) and you can feel the babies kicking, then things usually are moving along/progressing as they should. If there is pelvic separation, then the babies can be delivered in 48 hours but sometimes they will not be born for a few more days. [It is very important not to keep picking her up to check her.] She needs more Vitamin C and Calcium so vegetables high in Vitamin C and Calcium, such as kale and parsley, can be given. She can be switched to an alfalfa-based diet (hay and pellets) during the pregnancy and for a while after delivery. Grass hay may also be fed along with the alfalfa hay. The majority of deliveries run smoothly and do not require the intervention of the caretaker. However, if you are present keep an eye out to make sure that the mother isn't having trouble delivering the babies. KW jelly can be used to lubricate the baby (only) if necessary to ease the delivery. The membrane that covers the babies needs to be removed. Most times the mother will have no trouble removing it and cleaning up a baby. If she doesn't, pinch it to break it open and then remove it so the baby doesn't suffocate. It would a good idea to have a supply of clean towels in case you need to vigorously massage any of the babies to get them to breath. Make sure that you have the phone number for a vet or rescue on hand who can help you in case the mother is having problems with her delivery.

The one who was not healthy was Jasmine. She had multiple medical problems and her health/life and that of her babies were at risk. She needed to be handled daily since she was getting medicine. I used a little cuddle bed to "air lift" her out of the cage so she could get her medicine and then be returned to her cage. Her babies were born around midnight and, because of her medical issues, I called someone who had offered to walk me through the delivery. Jasmine did well and all babies were born alive. She was checked at the vet a few

​
I've had four rescues who arrived here pregnant, something I was not expecting (no pun intended). Three of the guinea pig were very healthy and the other was not. One who was healthy had a normal lead up to delivery and she had her babies in the early afternoon while I was at the shelter helping with their 85+ guinea pig humane case. When I got home I discovered a large clearing in the bedding and I looked in the large (giant-size) igloo that I had placed inside the cage for the mom and the babies. The three babies were all very healthy and did not require any extra care and later went on to be placed when they were weaned. 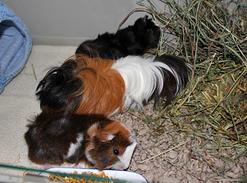 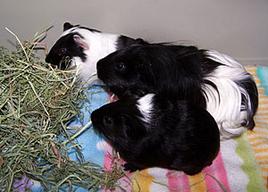