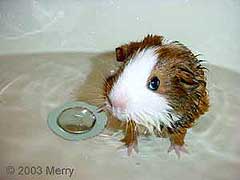 Got a few moments? Check out Izzy's The Tales Of The Wonderful Wheekers: Bath TIme. Some guinea pigs love baths and some do not. Find out if Miss Mop and her friend Luna survive the ordeal of The Bath.