After a visit to the vet: "The news was good in one way and bad in another. First, the bad. Tim would not improve as far as the paralysis went. The x-ray showed that his spine at the very bottom and up by his head was properly formed. But the middle part was sort of fused together in an undetermined mass. The vet felt that a severe calcium deficiency caused the abnormality. The good news was that, as we thought, he had no pain (and no feeling, either) from this. What we saw as movement was reflex of muscles.

Improvements were encouraging. He'd gone from barely lifting his head and having his front legs sprawled out to his side and always lying on his left hindquarters with his back legs motionless, to sitting up high with his front legs firmly in front and kicking with his back legs. We noticed he did more and more kicking ... we still had our hopes up. We were so delighted with his progress! He was a happy little fellow, had his own opinions about how his home should be arranged, talked a lot, and was a joy. 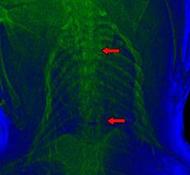 Tiny Tim developed a mini fan base that followed his healing process and the latest news about him. Some  would write letters to him and some created drawings for him likes the ones show below.

June 2, 2009: Tiny Tim passed away today: "I want to thank you and all of Timmy's friends for the help and assistance you've given us over the years. Timmy was a precious gift to us and we miss him, but are so honored we had him in our lives." Tiny Tim was found on Feb. 2006. He lived a very good life under the loving care of the Maris'. A life that was not expected to last overnight when he was found. 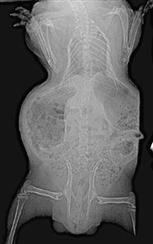