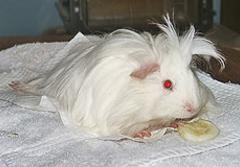 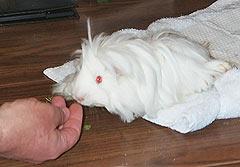 "Tim's days started out when I got up. After I'd crushed his chewable Vitamin C tablet with a rolling pin to make it into powder and spread it on two cucumber slices, I put a towel covered by a 'puppy pad' on the kitchen table. (He sat on the kitchen table to eat each morning while we had breakfast.) Tim would lay on it while he ate his cucumber. Then he got a nice leaf of kale (he wouldn't eat many of the other varieties of greens), a baby carrot, and two raisins. My husband gave him the raisins by playing "choo-choo" with him and Tim really recognized this. He would lift himself up as high as he could and reach forward, wanting that raisin! ... While he is on the table I changed his bedding - disposable diapers, refilled his water, and gave him food and fresh hay. His food was put in a jar lid which worked out fine. It was low; he'd only tipped it once and he could drag it where he wanted it to be. Then, throughout the day he watched us from his 'loft' as we went about our business. He got lots of greetings as we passed by and many pettings. In the evening he usually came out and would lay on our laps for a while and talk to us."

"Tim's hair was straight and stood in every possible direction. To keep him clean we washed and combed him regularly. [We took] him to the groomers once a month. He really seemed to enjoy that and they were super special to him ... Since he [later] moved around quite a bit (albeit dragging himself), he stayed much cleaner than when we first got him. He used to stay in one place and was really hard to keep clean." 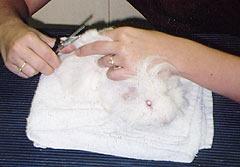 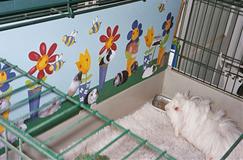 Tiny Tim received a donated Marchioro cage and stand along with some donated pads for his cage to replace the 10-gallon aquarium that he was temporarily housed in (he was not expected to live so no cage had been bought for him). The cage background was created by GPF and featured the guinea pigs of those who made various donations to Tiny Tim.
"Our granddaughter would visit frequently and she fed Tim and helped with his physical therapy. We worked his little legs by putting him in our hands. If you tickled him on the sides, he'd kick his legs out. We weren't sure if Tim's legs were damaged physically or by something else so I searched online and read that a Vitamin C deficiency can cause the appearance of paralysis. After big doses of Vitamin C and lots of TLC, Tim was getting stronger but still dragged his back legs." 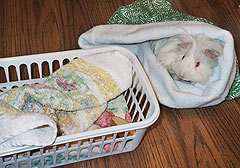 Like Guinea Pig Fun's Jasmine, Tiny Tim was a rescued guinea pig. Nothing was known of his background or why he was left at a library on a cold winter night. He was found in a basket with half an apple and half a potato outside a library in near freezing weather. How he managed to survive the near freezing weather is not known. As Jo describes, "He was so pathetic to look at. He didn't move at all, except for his front feet, which would sort of flicker. He could barely lift his head. He was so cold and so weak. I honestly didn't expect him to live beyond a day or two when we brought him home. We just wanted to give him some love while we could." [EDIT by GPF: *Potatoes are not a recommended food for guinea pigs.]