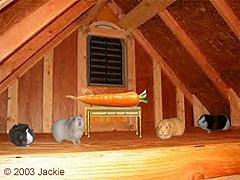 Zebu, the boss of the Aussie pigs undercover gang, sat in his den grinning at the huge carrot in front of him.

Just then Heidi, Zebu's hard working assistant, rushed in."Quick Boss!", she said. "The show is about to start!"